MogHA is an enterprise HA product developed based on MogDB by EnMotech. It is mainly designed for server crash, instance crash, and other issues. MogHA is able to decrease the database fault time from the minute level to the second level, thereby ensuring continuous running of system services. During the fault recovery, the customers are insensitive to the process.

The two-city-three-center architecture includes one primary database server, two synchronous standbys, three asynchronous standbys, and one cascaded standby. It can ensure that there are at least two database nodes in one data center. Real-time data synchronization between servers in two equipment rooms in the same city can prevent data loss or service unavailability due to single equipment room failure. The remote equipment room is used for disaster recovery and provides multiple data copies. The cluster architecture is as follows. 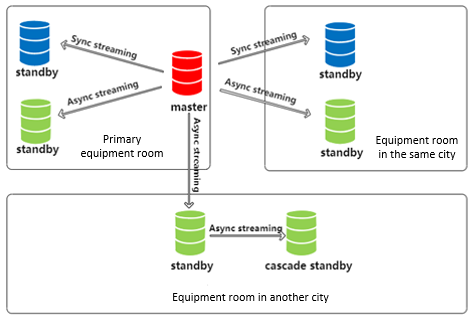